Rohan Vos was always a man of vision, an entrepreneur and when he launched Rovos Rail, little did he know what a huge success it would be. Imagine travelling through the South African and African countryside in a luxury coach brimming with authentic Victorian history, world class service and opulence at your fingertips?

Rovos Rail has earned an international reputation for its truly world class travel experiences. Exceptional train safaris combine some of Africa’s most magnificent scenery with travel aboard an authentically refurbished Edwardian-style train, accommodating up to 72 guests in the most spacious train suites in the world, each with their own en-suite bathroom and subtle modern conveniences. The eight scheduled journeys begin or end at Rovos Rail Station, the headquarters and private station of this independent railway company, which is situated in Pretoria.

Exceptional train safaris combine some of Africa’s most magnificent scenery with travel aboard an authentically refurbished Edwardian-style train, accommodating up to 72 guests in the most spacious train suites in the world, each with their own en-suite bathroom and subtle modern conveniences.

The eight scheduled journeys begin or end at Rovos Rail Station, the headquarters and private station of this independent railway company, which is situated in Pretoria.

The story of Rovos Rail reads like that of a best-selling novel. How one man had a passion for trains threw all caution to the wind to change his career. How he overcame myriad obstacles to get where he is today – founder and owner of Rovos Rail, probably the most sophisticated way to travel in Africa today. And today, Hollywood even knows about Rohan Vos and his big train adventure. Local documentary maker, Deon van Zyl made a fantastic short movie called My Life on the Tracks – the Rohan Vos story and it went ahead to be a winner at the Hollywood Independent Documentary Awards as one of the First Time Filmmakers! You can watch how Rovos Rail originated, thanks to the stamina and faith of Rohan as he steers his way through daily challenges to keep this dream alive. Tailor Made Journeys The station is in Pretoria and all journeys start and end here – book a charter if you like from one to 10 days and Rovos is happy to change the configurations of the train carriages to suit your party’s needs. Within reason, and subject to availability, the chartered train can go wherever there is a railway line in Southern Africa. The Station is a Museum Many new Rovos Rail passengers do not realise that their journey starts at the private train station in Capital Park, Pretoria. Yes, this once very busy centre of steam locomotion in the old Transvaal is now the head office for Rovos Rail. Starting the journey here allows guests to get into the gracious colonial theme a bit easier when they explore the railway museum. Everything is run very cleanly and slickly under the eyes of Rohan Vos and his dedicated team. Here carriages are repaired and maintained and here the catering is organised and the hotel tasks performed – washing, food preparation, ordering stocks and more. A world class tourism attraction needs world class behind the scenes action. On Board the Train The Rovos Rail train can cater for up to 72 travellers who get to use the sleeper carriages, the non-smoking lounge, the two non-smoking dining cars, the guest sleepers, smoking lounge and observation car. There is also the kitchen car, generator car, staff car and locomotive of course, the leading carriage. Privileged guests are served in the quaint Victorian aura of the dining cars where a keen group of chefs makes sure every guest and their personal tastes are catered for. Chefs use fresh local ingredients and try to create traditional South African meals including venison. Tea is also served in the afternoon. A gong calls people to meals and the evening dinner is the dress up meal – a formal occasion where men are expected to wear jacket and tie, and ladies cocktail or evening dresses. With respect to days gone by when modern technology was not even invented, Rovos Rail offers no telephones or television sets. If guests want to use their mobile devices and internet, they are requested to do so in their cabins, away from others. What has Happened Thus Far The Observation Cars were originally A-28 dining cars built to drawings by Mr W Day. Permission was granted by SAR to run Rovos Rail’s observation cars at the back of the trains, enabling the enlargement of the windows and the construction of unique open-air balconies. Coaches 225 NILE, 226 MODDER and 220 KEI entered service between 1935 and 1938 and stayed with SAR until 1983 when they were sold to Mr S Krok of Johannesburg. They were transported to the Jewish Guild Sports Club grounds in Morningside, Sandton, to become the nucleus of a novel restaurant. Rovos Rail purchased them in 1988 and restored them to service as observation cars. During 2010, a 1960 third-class sleeper 6320 was rebuilt as an observation car and has proved a great success. The ride is also a little better than its counterparts as the bogies are the more modern, commonwealth type. Today Find your way onto the Classic and Edwardian trains that travel with beautiful pre-1940 dining cars. Coach 195 SHANGANI was found in a scrap yard in 1986 and it took 18 months to rehabilitate her. But she still did not make it, being destroyed in a fire in 2008. Rovos acquired two of the old SAR coaches that were running in the 1930s and today he has built up a long line of carriages that make Rovos Rail what it is today – a railway journey you will never forget, done in real sophisticated colonial style. The Club Car area was created by completely changing the end suite in a deluxe carriage. Now smokers can be accommodated on the train in a public area and other guests can join in to see the scenery flow past thanks to the awesome glass passage wall.

Events Train Rovos Rail has proudly launched an Events Train. Limited only by time and distance there are many alternative uses, which include a three-hour circular trip around Pretoria or a one-way journey to any destination within eight hours’ rail travel time from Pretoria. Only suitable for daytime journeys and depending on the number of guests, the Events Train can host – with full-bar facilities – a four-course sit-down dinner for up to 120 guests, a three-course sit-down meal for up to 240 guests in two sittings or, for 250 guests, hot snacks, canapés and cocktails served for the duration of the journey.

PER PERSON SHARING PER NIGHT 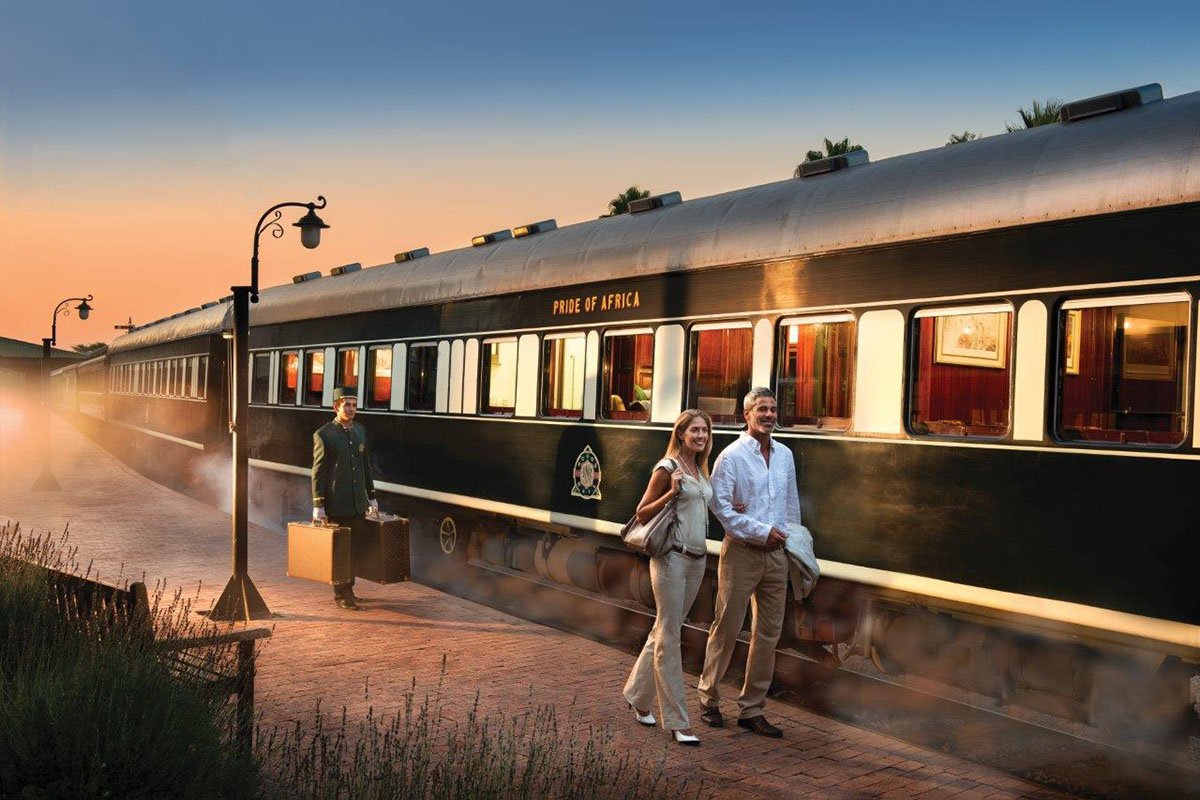 that include this property 14 Nights - ZAR 279 100 PER PERSON SHARING If you think 2 weeks in the African wilderness is blissful, then imagine a 2-week adventure in the African wilderness on a train trip? Now you can explore some of the most uninhabited and tranquil regions of Botswana, including the Selinda Spillway and Okavango Delta from the deluxe interiors of Rovos Rail. Experience top class camps owned by Wilderness Safaris & Great Plains Conservation, hopping on and off this famous colonial style train as you go. Opulent travel in style.
We use cookies on our website to give you the most relevant experience by remembering your preferences and repeat visits. By clicking “Accept All”, you consent to the use of ALL the cookies. However, you may visit "Cookie Settings" to provide a controlled consent.
Cookie SettingsAccept All
Manage consent

When you book with an account, you will be able to track your payment status, track the confirmation and you can also rate the tour after you finished the tour.
Sign Up

Or Continue As Guest